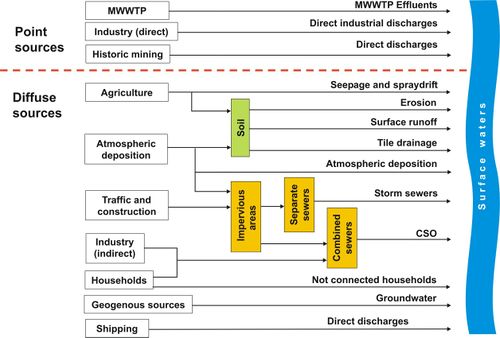 The Directive 2008/105/EC (on environmental quality standards) of the European Parliament and the Commission[1] asks the member states for an emission inventory of priority substances for all river basin districts. This task requires appropriate data and approaches to describe the current state of surface water bodies and to evaluate appropriate measures for the reduction of emissions into the surface water bodies. The overall aim is to achieve a good ecological state of surface waters and to comply with the quality standards.

To meet these demands, the established MONERIS nutrient emission modeling system [2], was adapted to the modeling of pollutant emissions into water bodies and implemented in an open source environment as the river basin management system MoRE (Modeling of Regionalized Emissions).

The following emission pathways are implemented in MoRE:

In addition to modeling emissions into the water bodies, an estimation of the river load on the basis of total emissions and a substance-specific retention is carried out. The modeling approaches and sources of input data are described in detail in Fuchs et al. (2010) [3] and Fuchs et al. (2017)[4].

Further informationen at Implementation of MoRE.

The MoRE system is based on a PostgreSQL/SQLite database, a generic calculation engine and two graphical user interfaces (GUI): the MoRE Developer and the MoRE Visualizer. The GUIs have been developed for user interaction with the database. The database content can easily be read, edited and extended via the MoRE Developer GUI. Modeling is done via a calculation engine which is incorporated in the Developer GUI a dynamic linkage to the database. Modeling results can be exported as a spreadsheet from MoRE Developer and visualized as a map or chart via a GIS-browser (MoRE Visualizer). MoRE can either be operated by multi user access using a network connection (as an open source PostgreSQL database) or as a single user application for PC (SQLite database).

While the development of the original MoRE-entity for all German river basin districts is ongoing, the model was and is used at the IWG for more detailed analyses in sub-basins: